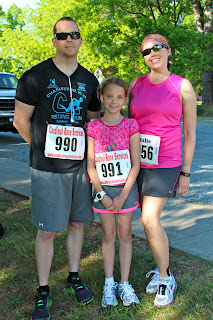 Well, I ran my first 5K yesterday!  The Dogwood 5K in Mebane.  I was so nervous before the race began.  A few days before, I had read that there were around 500 people preregistered for the race.  The day of the race of the race, around 600.  When the times were posted there were 531 names on the list!

My sister and one of her boys were able to come spend the afternoon with me and go to the race with us.  She was our personal photographer :)  I think she really enjoyed getting horrible pictures of me because there sure were a lot!  She is my little sister.  Really, she got some great pics of all of us!  They were also able to stay afterwards for dinner which was great.

OK, if you don't know me then I have to tell you that I don't like to sweat and I used to agree with my Mom that the only time you would see me running would be if someone was chasing me.  If you know me, I'm SURE you already knew that!  (I also don't like to be outside or get dirty).  And why would anyone want to bring self-inflicted pain on themselves by running?  About 10 weeks ago I joined the New Runners Program in my town.  They promised to take you from not running at all, to running a 5K in 10 weeks.  Couch to 5K.  So for these past 10 weeks I have been running with my new runners group and another friend who has been so encouraging (thank you Faith!!!!).  After huffing and puffing at least 3 days a week for 10 weeks, sore muscles and several running related "injuries" later, I am able to run 3.1 miles without stopping.  People, this is HUGE for me!  Our running club had run this 5K course 2 previous times with so we would know the route and know what to expect.  See, most of us had never run a race at all before.  I have been to several races to cheer my husband on and Ava did her first 5K last year, but I had never experienced the adrenalin rush and excitement of actually being in the race.

I knew what to expect from a spectators point of view, where to stand to watch, when to expect the first runners back and the ones you are supporting, and the excitement of your friends or family crossing the finish line.  I didn't know what to expect as the herd of hundreds of people "line" up (it's more like a crowd) at the starting line.  What was even more nerve racking was that I knew how many people were running and I knew that there was only about half that amount entered in the race last year (somebody please correct me if I'm wrong on those numbers but if I remember correctly, I looked at the race results last year and there were around 288 people).  What happens if the people in front of you are slower as the gun goes off?  What happens if the people behind you are faster than you and you get knocked down?  Will trying to get around people slow me down and cause me to exert more energy than I'm used to?  Will my time be better or worse than practice time?  Will I really get that last burst of energy at the end when I hear the crowd cheering for us at the finish?  I'm glad to answer a big "YES" to that last question.  Will I be able to keep a steady pace?  The mentors from running club had gone over all this stuff with us a few weeks before but you really have to experience it to "get it".

All these questions on top of worrying where my 9 year old, Ava, was in this massive crowd of people.  Will she get trampled?  Fall down?  Get hurt?  I scanned the crowd in front of me for about the first mile before I saw her and I am relieved to say that she did awesome!  She did not get trampled or fall down (nor did I) and she finished about 4 minutes ahead of me.

I started off great!  I dodged people here and there and had a good pace going.  It was completely different than running with my running club where there was usually around 20-30 people running.  I did get slowed down a little and had to dodge around people and maybe it did take more energy.  I also had to look out for all those kids who were running.  You know, a shoe comes untied - just stop and tie it, right in front of me :)  They did great though!  I am so thankful to live in a town that is truly passionate about health and fitness and getting our kids and their families active.  All of the elementary schools in our town now have running clubs for the kids.  A big shout out to all of the teachers who coach these kids and take time to get them ready for the race!!!  One of these people just happens to be my friend, Erin, who is an awesome runner (triathlete) and a huge inspiration!  Another one of these is Ava's 4th grade teacher, Mrs. Gibbs.  I was thrilled to see all the running club coaches from our school running with their kids.  There was also the PE coach, Adrianna's 1st grade assistant, 2nd and 3rd grade teachers, and more coaching the kids and running.  I was happy to see so many of the coaches come back and run with kids after they had finished with their first groups.  Yes, that means that they finished, ran back to find more running club kids - passing me along the way - and running back to the finish again!

Like I said, I was doing great for the first two miles.  At the 2 mile mark, there was a lady calling out your time as you passed by and at 2 miles I was at 21:15.  I was thinking, heck yeah!  Keep this pace up!  But, with only one mile to go, I started pooping out.  There were hills.  And inclines.  And did I say hills?  I slowed way down but saw some fellow new runners and decided I needed to keep up.  I'm happy to say that I ran the whole time and gave it my all at the end.  Even though I felt like my lungs were going to explode and my left ankle was going to detach from my leg.


What excitement when I was coming around the bend towards the finish line!  I saw my hubby and Ava waiting for me at the corner.  Ava jumped back in and ran with me through the finish.  What an awesome girl I have!!  I had tunnel vision and my sight set on that finish line.  I had no idea where my sister was or my friends.  The only other person I did "see" was Tammy, an awesome running club mentor, holding her hand out for a high five as I ran by.  That was great!  People were clapping and yelling and it really did make me speed up.  But crossing that finish line was the best feeling.  A feeling of relief, elation and accomplishment.  By "the best feeling" I mean emotionally because I was in some pain!

After cheering on the rest of the runners, we mingled with friends and took pictures.  I just have to say that this was so much fun and it was even better because Aaron, Ava and I all did it together.  Of course we had a post race celebration at a Mexican restaurant with friends!

Before I even ran this race, Ava and I have already planned our next 2.  But first I'm going to rest this ankle!  Hopefully I will be better in a week or so and be able to keep up my running.  I'm looking forward to running more races with my family and hopefully catching up with them in the future :)

While we were running our race, my Mom took Adrianna to her soccer game.  Guess what I missed?  My baby girl scoring 4 points in her game!!!  What!?!?!

Natalie
Wife to one awesome hubby and mommy to two wonderful daughters. I love to sew, crochet and craft. 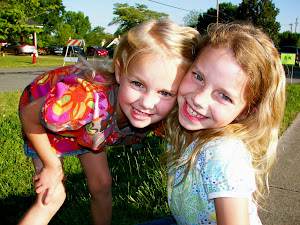 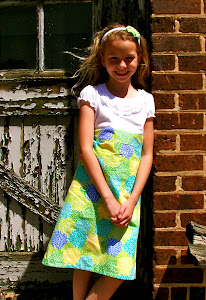 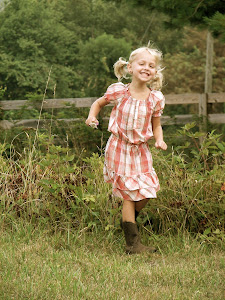